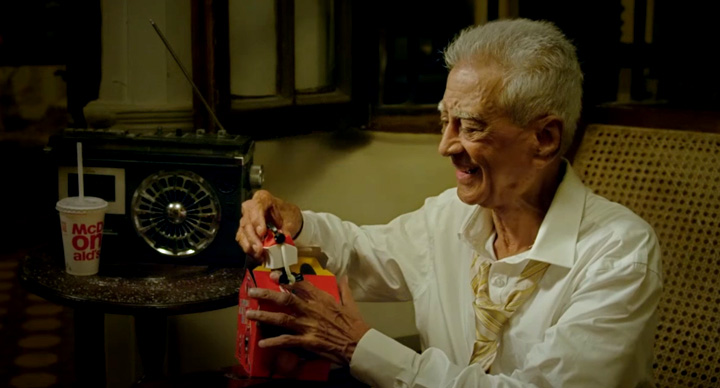 Mrs. D’Souza and Mr. Damle live by themselves in Mumbai. Neighbours, and getting on in years, Mrs. D’Souza and Mr. Damle are forever squabbling, finding fault with each other. There is always something that gets the other going: loud music in his house, her dog chewing his slippers, his car parked in the driveway…there couldn’t be neighbours who really seemed to despise each other so much. There was really nothing the other could do right.

One evening, Mr. Damle is deeply unhappy that his son has cancelled their plan to have dinner together. Disappointed and preparing to make his own dinner, the doorbell rings.

At his door is a McDelivery boy with a delivery of a happy meal.

Mr. Damle’s disappointment turns quickly to a strange joy when he realizes that his ever combative Mrs. D’Souza had ordered his dinner. She, in turn, is pleased at his happiness over this simple act.

Somewhere along the line, the two had looked out for each other through long years of being cantankerous neighbours ever willing to fight over trifles.