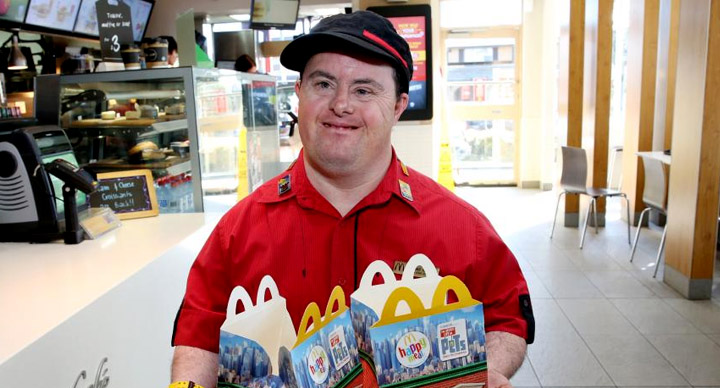 From 1986 to 2016, Russell O’Grady, a McDonald’s employee with Down’s Syndrome, has brought smiles to many customers’ faces. The store recently celebrated his 30th anniversary on the job.

Russell had started working at McDonald’s when he was 18. Today, he is a local hero at McDonald’s Northmead, in west Sydney, Australia. A very social person, Russell says hello to every customer at the restaurant.

Russel’s father Geoff O’Grady describes his son as a very affectionate person. Geoff says that though he was “extremely proud” of his son, he had never thought the community would embrace him the way it had.

He recalls the time somebody asked his son, “Are you handicapped?” and Russel’s answer was “I used to be when I went to school, but now I work at McDonald’s!”.

Indeed, Russel is a much-loved colleague at McDonald’s Northmead. Though he packs the party boxes and clears the trays, his favourite job is to greet customers at the restaurant.