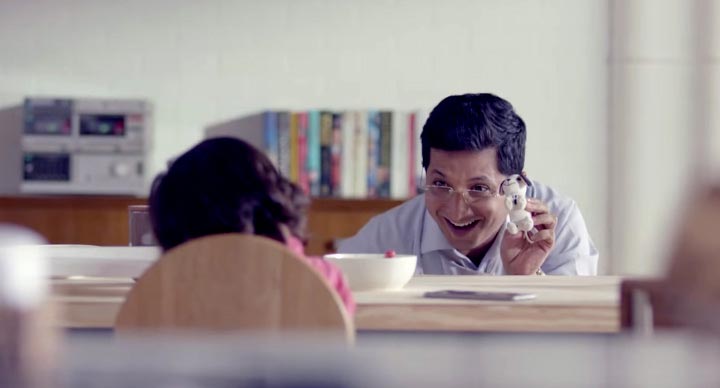 In the 20 years that McDonald’s has been in India, it has made a place in people’s lives not only through its restaurants and unique menu items, but also struck an emotional chord through its out-of-the-box advertisements. Here are five of the many ads that captured McDonald’s essence perfectly:

One of the very first ads for McDonald’s in India was one which came out in 1997. It made an instant connect with everyone because it told a story and took its time to tell it. Unlike the now-you-see-it-now-you-don’t ads which seem to whizz past you, this ad was quite long. The scene opens with a little boy onstage at school, feeling too shy to recite a poem. Neither his teacher nor his parents who are in the audience, are able to make him speak.

Cut to the next scene, and the boy’s father is taking him to McDonald’s to cheer him up. The moment the boy walks into the restaurant, with its warm ambience, he realizes he has come to a familiar place and his mood perks up. When his Dad prompts him to recite his poem, he does so easily. Soon, other people in the restaurant hear him and start applauding, including the manager of the restaurant.

The takeaway for the TV audience was that McDonald’s was a place where a family could have a nice time.

Another oldie, this ad is where a father picks out a birthday invite from the letter box and hands it over to his son. The invite is for a party at McDonald’s. His son gets excited, but the father hesitates. The son tries to persuade his father by reeling off names of food at McDonald’s and sure enough, his father finds the plan hard to resist. But when he lands up at McDonald’s, he discovers that the birthday boy is none other than his boss! Hilarity ensues and he meekly hands over the ‘birthday gift’ to his Boss. Mc Donald’s is a place for kids and adults alike, is the message.

In this heartwarming ad, a boy in a school van asks the driver to take a different route back home, saying he needs to be dropped elsewhere today. But the place where he stops the van is a McDonald’s takeaway. The driver looks surprised till he hears all the boys in the van wishing him “Happy Birthday”. Touched by the gesture, the driver orders burgers for all the boys. Later, munching a burger himself, he says with a lump in his throat, “I’m Lovin It”!

4. Get real, get offline

Its latest ad is spot-on once again, asking viewers to spend #KuchPalOffline, thus taking a swipe at the national obsession with cellphones. It builds up the theme by asking people to go offline and get in touch with reality, live the real moments of life by sharing one’s time with others. It concludes with the message, spend #KuchPalOffine, with friends and family by enjoying the new “Sharing Packs” from McDonald’s.