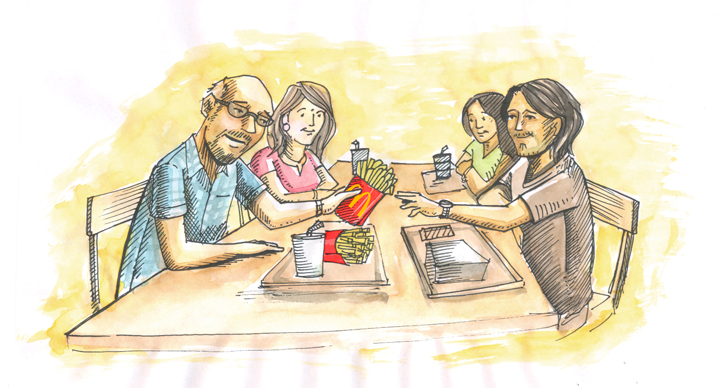 I have been on this highway before. Many times. Earlier it used to be a squiggly road that ran from Mysore to Bangalore. And then it became wider. Four lanes carry traffic from the hub of IT in Bangalore to the new hub of IT, Mysore. But this trip is different. Shortly, in a little under three hours, I will be getting into the terminal of the new spanking Bangalore Airport and catching a flight away from home, chasing a dream. Away from the family. All of them packed into this SX4 – seeing me off.

Dad has that inscrutable look as we cross the town of Maddur. He doesn’t like to show that he is worried about me going to the US. He had scrounged together a big fat loan for me to chase my dream. I couldn’t drum up a scholarship, but he didn’t want me to stop chasing my dream. I still could have worked a few years and then put together enough to go. I glance at him as he maneuvers the car with practiced dexterity. His 55 years sit lightly on him, but the grey is getting more. Mom is fussing with Kavya. Or the other way around. Kavya, six years younger, and heading for her PU boards next year but still full of beans. Her chatter doesn’t sound as bothersome as it usually does. Probably because I think it will be a while before I hear warbling like the brook.

The Golden Arches loom ahead. I know we will stop here. We have done so very many times before. Mama likes to go here for, of all the things, the clean loos. She is quite finicky about everything. But it’s probably got more to do with her fastidiousness about having pure Veg food. And her love for western food. She likes her AlooTikki burger that she picked up during her days in Mumbai. We don’t ask her anymore what she wants to order. Though nowadays, she is adding wraps to her plate. And sometimes finishes off with a McFlurry. Dear Mama. And there is Dad. The French Fries man. I think he even tried to hunt down the potatoes that make those fries so he could have a year long supply at home. Always protective about his fries. How I will miss his insistence that he wants his French Fries all for himself. They almost built a campaign for him – won’t share my fries.

The SX4 scrunches into the driveway. Ample space. Dad hates to have the car squeezed in between the others. This stopover suits him very well. Just the right distance from Mysore, just enough space to park and stretch his legs and an easy pace. Kavya is out of the car like a shot. If there was a little carnivore on legs, it was her. She was one of those that had an insatiable appetite for all things meat. I look at Mama. She seems to be suddenly reminded of all the times when we stopped here. Like the time when I had walked into the McDonald’s kitchen to check how the McEgg burger got that golden look. Or the time we all sat down and sang songs to Shake Shake fries.

Funny place to have these thoughts. But then we had always been a foodie family. Dad comes and puts an arm on my back. That’s the closest he would get to showing his emotion. Except when he is singing songs. There is much that he possibly wants to say. I guess Dad’s keep asking the question “Have I done enough?” Wish I could hug him and tell him that he has done enough.

We line up behind Kavya. She is going all guns. McSpicy Chicken. BigSpicy Chicken Wrap. Chicken McGrill. Chicken Nuggets. The order tumbles out in a cascade. For a 17-year-old, she hasn’t outgrown her ebullient childhood. We all dutifully put up our orders. Dad sticks to his fries and Cappucino. Mom sticks with her AlooTikki. I order my usual Maharaja Mac.

I look up at the menu. Maybe McDonald’s will be my regular port of call. Strange that a brand that was so American once will remind me of home, in the US.

On the next table, there is a passel of Gujarati tourists. They come in groups. I guess they take to McDonald’s because they have heard about how it keeps it Veg and Non-Veg truly separated. Or maybe the comfort factor of the ones in Ahmedabad gets extended to the ones here. The knowing what to expect and what to expect – fresh, affordable, safe and in a clean place – and yet very Indian in its flavours. I guess they are all tucking into a McSpicy Paneer. Hmm.. I don’t think there will be Paneer on offer in the US. But I wonder if I will also head to McDonald’s in the US because it reminds me of home. I shake my head. I catch Dad’s eye. I think he knows a bit of what I am thinking.

Dad reaches across, holds my hand like he did when I about five. A firm clasp. Kavya looks up – usually jealous but now the moment catches her. He picks up his packet of fries and holds it out: “Have some.”